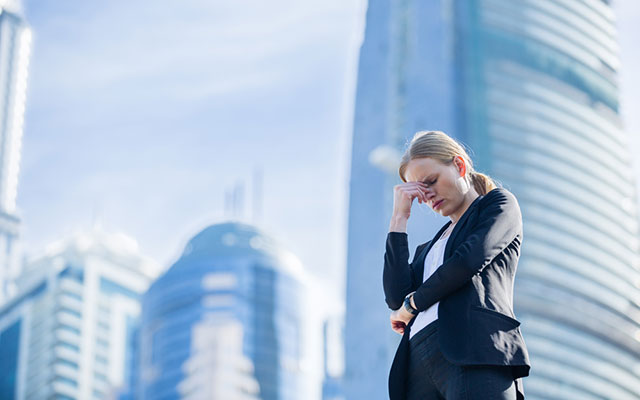 Mental health problems appear to be on the rise, according to a survey from the Centre for Addiction and Mental Health (CAMH).

People also reported they had experienced frequent mental distress in the past month, at 11.7 per cent compared to 7.4 per cent in the previous CAMH Monitor study.

“It’s very important to prioritize work with mental health considering that we know an estimated $51 billion annually in Canada is around mental health-care costs.”

For managers and business leaders, it is incumbent to face the issue head-on, said Julie Ruben Rodney, founder and CEO of MaxPeople, an HR consulting firm in Richmond Hill, Ont.

“There are things to do, like act sooner: As soon as you start to see something, don’t wait until they blow up — (but) make sure that you’re respecting people’s privacy, it’s very important, that there is a true, genuine concern.”

“Your most brilliant employees can be the ones to have the mental-health challenges and how do we allow them to be in an environment, to work, in a way that we’re being mindful of the things they struggle with?” said Ruben Rodney.

Employees are regularly taking time off work, which costs employers as well, and a large part of that is due to mental-health issues.

“Five-hundred thousand Canadians don’t show up to work every week and it’s not the same 500,000 Canadians, otherwise those individuals wouldn’t have jobs. It’s a different 500,000 every week who are not showing up to work because of a mental illness or substance-use concern,” said Lawrence Blake, project manager at Mental Health Works Canadian Mental Health Association Ontario in Toronto.

Poor mental health doesn’t stay at home, obviously, and Canadian workplaces are still playing catch-up when it comes to addressing the issue, according to Ruben Rodney.

“When people come to work, they come as their whole selves with everything that comes with that.”

But “as an employer, it’s our duty to really look at that individual and make them aware of medical care. Bell Talk is helping really take away some of that stigma,” said Ruben Rodney. “Leaders needing to play a role in getting closer to their people.”

While good employers can help employees better cope with stress, sometimes the makeup of the modern lifestyle brings its own stressors.

“I carry my office at the end of the day home with me in my pocket. It’s on my phone so that causes stress, causes anxiety. Increasingly, we’re finding while we have great tools at our disposal, to be able to get work done and be more productive and more effective in our work, that means that we’re taking some of that work home with us.”

One of the new buzzwords in the mental-health industry is “resiliency,” according to Blake, and that means creating employee resiliency to combat stress.

“What I like to say is ‘You need to think about resiliency as a muscle.’ I can’t expect to wake up tomorrow and tell myself ‘Today’s the day I’m going to run the marathon’ and then just put on my running shoes, and go and run 43 kilometres. I’d probably be in for a pretty rough time.”

“Resiliency is like a muscle as well. It’s something that we have to exercise, in practice, on a daily basis in order for it to be effective when we really need it,” said Blake. “HR should commit to programming in the workplace that helps build that resiliency muscle in your workforce. It could be things as simple as having a day where you all learn yoga or you learn meditation or grounding techniques or you go for a walk together, go to the ROM or the AGO or a museum together.”

But we don’t want employers or leaders to become armchair therapists, delving into our psyche or thinking they can cure illnesses, said Mary Ann Baynton, program director at the Great-West Life Centre for Mental Health in the Workplace in Waterdown, Ont. It’s about the emotional intelligence and development of leaders, along with preventing burnout and trauma.

That can mean activities of 15 to 30 minutes, she said.

“You don’t have to invest a lot in terms of time, money, technology, just conversations that seem relatively easy in a workplace, but are known to help build resilience.”

“Mental health is called the invisible disability that you don’t often see. Your employer sees people are taking time off because they have a lot of headaches or they have the flu. You may not know if it’s just that they can’t get out of bed in the morning, or they had panic attacks the night before, and couldn’t sleep; it is probably not as likely that you’re going to be able to get that kind of information,” she said.

It’s about educating employees on how to come forward and have conversations with their manager, said Ruben Rodney.

“And then also ensuring that managers are equipped to be able to know what to do with these scenarios,” she said.

When considering a new policy, program, decision or change in strategy, HR should consider how it might impact the psychological health and safety of stakeholders such as employees, leaders or clients, said Baynton.

“That actually makes them stop and think about what the unintended or intended consequences might be so that they avoid stepping on that landmine.”

And when HR professionals consider continuing professional development hours, some of those should include mental health or mental wellness or psychological health and safety, said Blake.

“That’s just like having someone in the workplace with first aid and CPR from St. John ambulance; you hope you never have to use it but that one time someone falls down in the hallway and you know how to do chest compressions, you’re saving that person’s life — having at least one person in the office with mental health first aid will end up saving a life at some point,” he said.

On the positive side, the shame that used to prevent people from seeking help for mental health problems seems to be disappearing.

“Health is health, whether it’s physical or mental health, so we need to normalize the talk as much as possible. We have noticed stigma reduction, definitely in the past five to 10 years; more so I would say the past two to five years, which is wonderful,” said Kamkar.

People are more aware and more likely to report than they were a decade or two ago, which is a good thing, said Baynton, “because I’m not sure that the rates are necessarily going up but I think that the ability for people to reach out for help to self-identify is going up.”