Think Before You Ink: Tattoos, Piercings, and Why They’re a Hot Topic in the Workplace 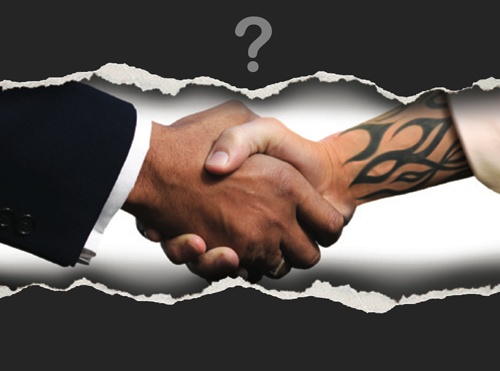 Think Before You Ink: Tattoos, Piercings, and Why They’re a Hot Topic in the Workplace

Kendra Behringer must have a difficult time at airport security. The Edmonton woman has 22 piercings above her neck – including 7 facial piercings and 15 earrings. Ms. Behringer says she gets a lot of dirty looks, and undoubtedly a few quizzical ones. But some of the most bothersome ones have come from employers. Behringer told the Edmonton Journal recently that one retail manager “didn’t even look at my resume, he just looked at my face” and promptly threw out her resume right in front of her.

Generally speaking, the move is rarely, if ever, advisable. Like any relationship breakdown, it is difficult to mend fences unless the conditions are significantly different than they were previously. If an employee has spoken ill of their employer or workplace in a public forum, the relationship is likely severed, and impossible to reconstruct unless there are significant changes that occur in the workplace, such as a major overhaul of leadership.

Behringer is fighting back by launching a petition to adapt human rights protection against workplace discrimination of employees with tattoos and piercings. The petition is gaining steam with signees, but the issue has become a hot topic in the world of HR. Should employees who have visible body modifications, such as numerous tattoos or piercings, be evaluated based on their appearance during the hiring process?

There are colourful opinions on both sides of the issue. Discrimination based on ‘immutable physical characteristics,’ such as race or disability, are expressly protected under human rights codes and other legislation, and it would be discriminatory to make any hiring decisions based on a characteristic that an individual cannot change.

Tattoos and piercings however, while not easy to change once established, are a matter of personal choice. Body art can be a proud form of self-expression, but can also be located in places that can be covered based on business dress codes, or to meet any other requirements. While dress codes have relaxed significantly in recent years, professional appearance is still imperative for many employers, especially if employees will be face-to-face with clients.

Behringer’s petition may have its fans, but is unlikely to amend human rights legislation, and even more unlikely to impact professional workplace decorum. With businesses that involve client interaction, a vendor’s corporate culture must align with expectations from potential clients, and it is always advisable to air on the side of caution. Appearing conservative is more often than not (and depending on the industry) preferable to a loud and garish presentation.

For employees, the lesson here is think before you ink. Tattoos and piercings can be an important form of self expression, but if you aspire to conduct business in more conservative environments, it would be prudent to keep their location in mind.

For a lighter take on the situation, listen to CBC Radio’s comedy program This Is That’s mock take on a city councillor who decided to get her first tattoo in a rather prominent location.